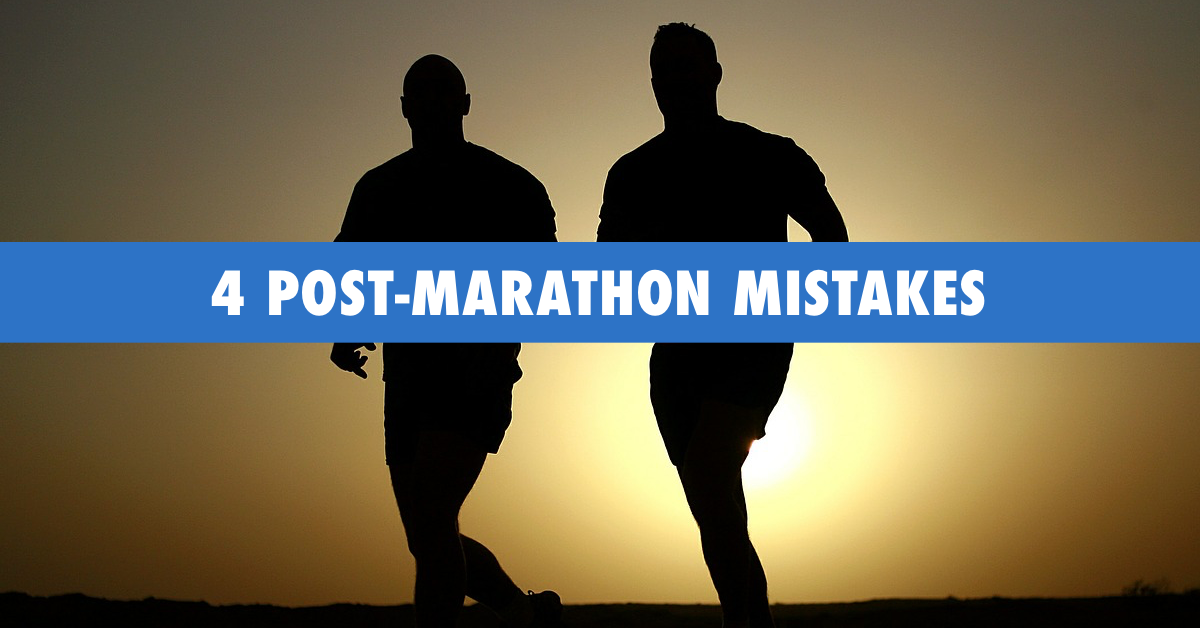 This is part of a series of posts I’m doing focused on marathon training. To get “The .2” posts in your inbox, sign-up here!

With fall marathon season in full swing, it’s time to talk about what comes AFTER your marathon. Specifically, I want to talk about four mistakes that I see runners make in how they approach their post-marathon training and what you can do to avoid making them yourself.

Mistake #1: Getting Back into Training Too Quickly

This is probably the most obvious, but is still definitely the most common!

Here is my very general guide for getting back into training post-marathon:

You can see that this plan not only is conservative with the mileage, but also puts off speed work for several weeks. Those kind of hard efforts will dig you into a hole if you try to add them in too quickly after a marathon.

If dealing with injuries, double the progression

Also, I know it’s a lot to ask, but if you were dealing with any injuries during the training or you were starting to feel burned out by the end of the training, I would recommend at least considering doing each of these weeks twice so that you have an eight week return to training.

Whether your marathon goes great or terribly, right after the race is a time when emotions are running high and it’s easy to want to rush into your next goal. I’ve seen this go both ways:

That was great, I ran awesome -- I'm going to run a half in two weeks and get a PR there, too!

This approach may pay off, especially if you’re not dealing with any injuries and you had a relatively short training cycle leading into the marathon. But it can also be setting yourself up for injury by pushing too hard, too long.

What a disaster. I'm going to run another marathon next month so I don't waste all the training that I put in.

Of course there may be circumstances where this approach makes sense. I’ve had runners who had a bad marathon because of GI issues (or some other non-running reason) come back 4-6 weeks later and have a great marathon. But, generally speaking a marathon not going well is a sign that it’s time to regroup, not press ahead.

In each of these cases, I’m not saying that it’s guaranteed that you’ll have a bad experience. But there are risks to both of these approaches, and I don’t think that you should rush into either of them.

Take a least a week of easy running and then take stock of how you’re really feeling mentally and physically before deciding if you’re ready for another race right away.

Mistake #3: Being a Slave to the Marathon

Believe it or not, there are other races that you can run besides marathons — and some of them are pretty fun, too!

Not only that, but mixing up the races that you’re focusing on is a great way to keep improving as a runner. Your body tends to plateau when you do the same type of training consistently. So focusing on something new and different for awhile is important to keep seeing improvement.

Changing your focus keeps you from hitting a plateau in racing

This doesn’t mean that you need to take a whole year off from marathons, or even only run one a year.

44 weeks, leaving us 8 weeks in the year to play around with

Even something as simple as a 4-8 week stretch of training that is geared towards 5k work can be enough to get your body jumpstarted and get you ready to tackle higher intensity training in your next round of marathon training.

You’ve heard the phrase “the definition of insanity is doing the same thing over and over and expecting different results.” Well, it’s time to take that advice with your training.

Either way, take the time post-marathon to critically ask yourself:

What went well in training?

What didn’t go well in training?

These questions are important whether your marathon went very well or very poorly. And the answers are very helpful in planning out your next training cycle, particularly when taken in combination with the rest of the advice I’m laying out here.