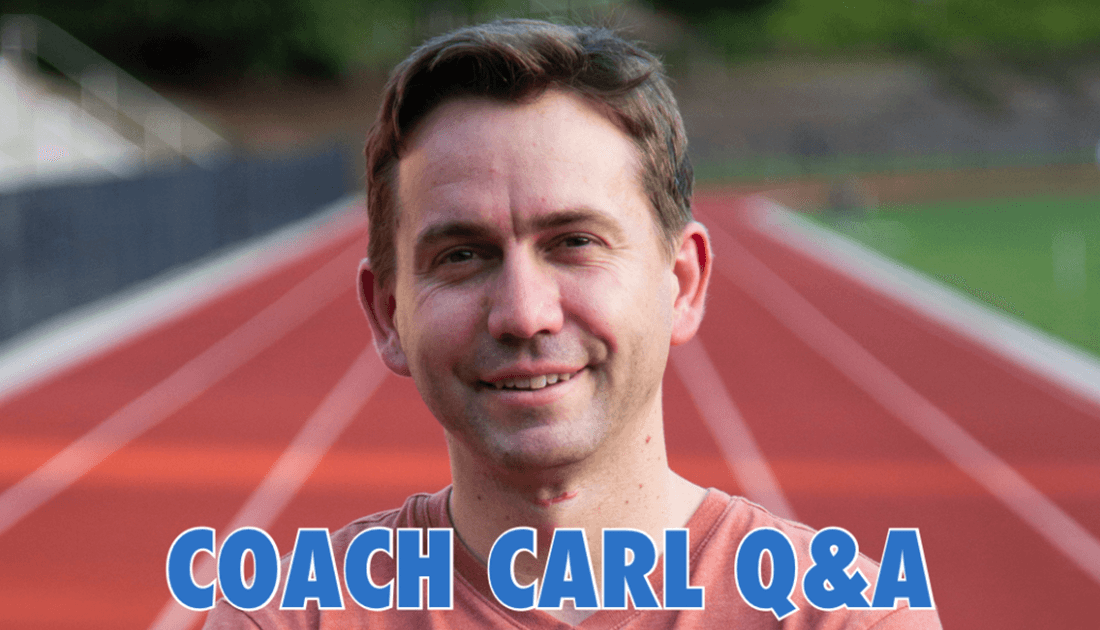 Q&A: Forget about 180 steps per minute

Welcome to another edition of Coach Carl Q&A (submit your questions here). Let’s get to it!

This is a great question because cadence is one of those running topics (like form, or stretching) that produces a wide variety of opinions. To start, let’s go over some general background on cadence.

Why people worry about their running cadence …

First, a quick definition: when we talk about cadence in relation to running, we’re taking about how many times your foot hits the ground per minute.

In 1984, Jack Daniels, PhD decided to look at the cadence of the Olympic runners in the events from 800m to the marathon. What he found was that almost all of them had a cadence over 180. Thus, the legend of the “ideal” cadence was born.

A better goal is to try to slightly increase your cadence

So, broadly speaking that’s why the “magic number” of 180 gets thrown around as a goal to shoot for. However, I think a better goal is to try to slightly increase the cadence you are currently running at and not worry about what the Olympians are doing. (That’s pretty good advice for running in general, actually.)

Why people SHOULD worry about their running cadence …

Daniels says that most non-Olympic runners have a cadence in the 150-170 range (hello, Dan!). Now, will increasing your cadence automatically make you an Olympic runner? Are you already really close to being an Olympic runner? Then probably not. But, there are some useful things that a higher cadence does:

2) Increases efficiency by providing more opportunities to push off, and less time floating through the air.

Now, as to the specifics of Dan’s questions …

1) Why is this so hard to improve running cadence?

Well, one answer is because your body doesn’t like to learn new things. If you’ve been running for years, your body has built up a movement pattern that it is very comfortable with. So the way your legs move when you run is pretty ingrained at this point. It’s going to take time to change.

The other answer to this question is that it is likely that you haven’t been doing anything to improve your cadence that will actually be effective. So, that’s a nice segue into …

Often when I talk to runners about increasing their cadence, the first thing that they talk about is trying to shorten their stride. This makes intuitive sense, but it’s a tough thing to really do in practice. Daniels recommends that instead of worrying about stride length, you focus instead on the cadence itself — and since he got us into this mess, let’s go with it.

Instead of worrying about stride length, focus on cadence

If you read my blog regularly, you know I’m a big fan of the “Ankling” sprint drill. We can coopt that drill and modify it slightly to help us work on cadence:

1) Do the ankling drill for 20 seconds, counting how many times your left foot hits the ground.

3) Repeat the ankling drill for 20 seconds, aiming to get a higher number of foot falls than your first time.

4) Rest 40+ seconds and do two rounds counting the right foot, trying to increase on the second round

NOTE: I like to do two times focused on each foot so that you don’t artificially train just one leg/foot to move more quickly. This is great to do before your run, or before speed-work.

You can take a similar approach while you’re actually running by counting foot falls for 20-30 seconds and then trying to increase the number.

A couple notes on this approach:

1) I would recommend doing it relatively early in the run so that your legs aren’t as tired. Once you get the hang of it, then you can transition to working on it later in the run when your body will naturally want to slow down.

2) Daniels recommends running on a treadmill while you’re working on this so that you can hold the speed constant and have one less variable that could influence your running cadence. That, of course, is a brilliant idea.

So the key takeaways are:

— Increased cadence will probably help you

— Do cadence work before your run / early in the run to give your body its best chance to learn something new!

Hope that helps, and here’s to many, many speedy steps in the future!