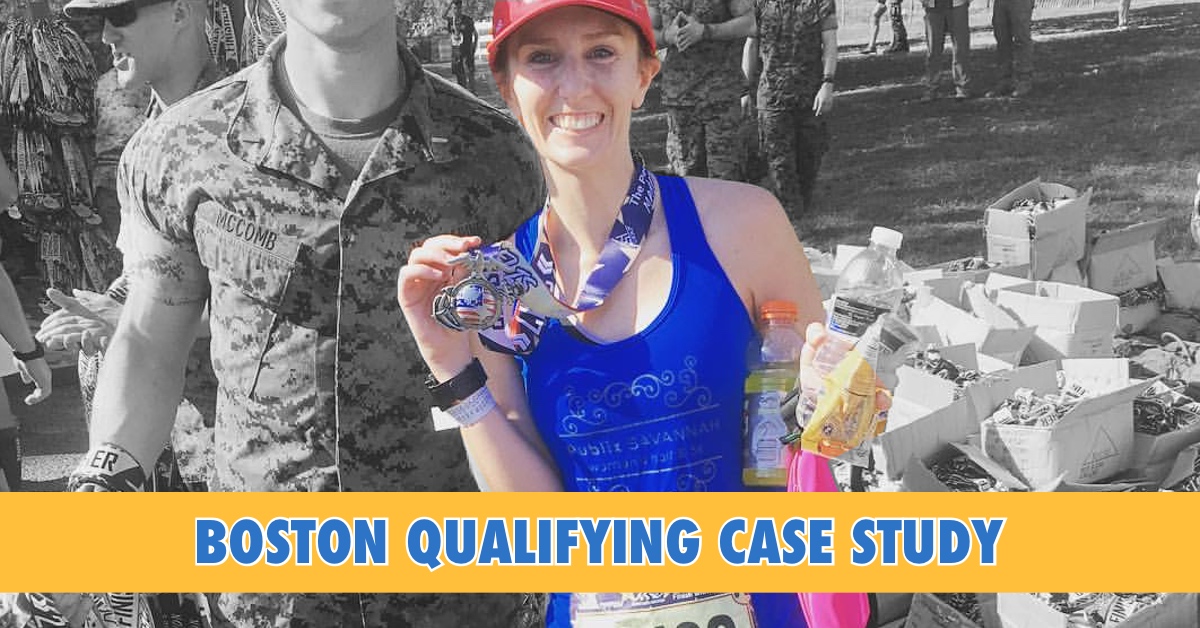 One thing that runners don’t appreciate enough is that you can’t do the same training from year to year and expect to keep improving.

In order to keep getting better as a runner, you need to make sure that you’re taking stock of where you are and what makes sense for your training at THAT moment — not just doing what you’ve always done.

To help illustrate how that works in the real world, I put together a case study of Brooke — a runner I’ve had the pleasure of coaching the last couple years. This fall she ran the Marine Corp Marathon (her 2nd marathon), dropped 10 minutes off her PR, and was able to BQ for the first time.

I’m going to compare her 2017 training with her 2016 training to highlight some of the key changes that we made to her training (and one thing we didn’t change) that allowed her to see the improvement she did.

Changes in your training need to take into account your situation, not just be change for the sake of change

Hopefully, learning why we made these adjustments will help you as you look ahead to your next training cycle.

First a little background on Brooke …

In Nov of 2015, Brooke was diagnosed with a tear in her hip labrum. She was released by her PT to begin running again in February of 2016. After a period of gradually getting back into a routine of training and building her mileage, she started a 20 week training cycle leading into the St Jude Marathon in Dec of 2016.

St Jude went well, especially for it being Brooke’s first marathon. She ran pretty evenly throughout, managed to avoid “the wall,” and finished in 3:40.

With that as background, let’s go more in-depth on the changes that we made to her training and the thought process that went into it …

I’m a firm believer that being stronger / more athletic makes you a better runner. Strength training improves your running economy, which makes you faster. And being stronger also allows you to train harder without getting injured. Being able to stay injury-free and put in quality training week after week and month after month is a sure-fire way to improve as a runner.

In Brooke’s case, she started going to Orange Theory Fitness two days a week in January of 2017. Because Orange Theory includes some running in their classes, we were able to pretty seamlessly incorporate it into her marathon training.

One class each week took the place of an easy, recovery run. The second class each week replaced a day that had been a rest day in 2016. I wasn’t concerned about this being too much work for Brooke since she would still have one complete recovery day each week and one optional recovery (or easy cross-training) day.

Even though that left Brooke with one less running day per week than in 2016, the running that she was doing during the classes meant that she wasn’t losing much mileage overall — and would be getting a pretty big benefit from the additional strength work that would make up for it.

For Brooke, her mid-week, non-speed day was in the 5-6 mile range for the majority of her marathon training in 2016. For 2017 we increased that to where she was consistently at 8 miles during her highest mileage weeks.

There were three reasons why I felt comfortable bumping up her mileage on these runs:

2) Since she had fewer running-only days, it made sense that she could handle a bit more work on the days that she did run and still be safe

3) She would have the added strength from Orange Theory, and should be able to handle more mileage

Those extra 2-3 miles may not have added much to her weekly mileage, but adding 2-3 miles at the end of a 5-6 mile run does provide a nice endurance boost. That meant that her medium-long run wasn’t just a recovery run any more — it was a way to supplement the endurance that she was building with her long runs.

And speaking of long runs …

The cornerstone of marathon training is always the long run. The marathon is first and foremost about the extension of endurance and the long run is the most effective and specific way to improve that endurance.

Since the first few weeks of Brooke’s marathon training cycle didn’t include many “true” long runs, I looked at some stats for her long runs over the last 15 weeks leading up to both St Jude and Marine Corp:

You can see that the total mileage in the long runs was roughly the same. However, that doesn’t tell the full story. In 2017, there was one week with no long run at all (vacation) and one weekend with no long run because of a race.

So that means that the average distance of Brooke’s long run was considerably different — 14.2 in 2016 versus 16.4 in 2017. That meant that every time Brooke went out for a long run, she was averaging a longer run than she did in 2016.

We could do this partly because she wasn’t coming off injury, but also because it wasn’t her first marathon training cycle. Because Brooke had the experience of the longer runs from her marathon training in 2016, it was less of a shock to the system and I felt like she could get by with longer long runs on her “recovery” weeks.

Brooke also did more work on the high end of her long runs:

This bump up in average long run mileage and the number and density of long runs probably added more stress than any of the other changes Brooke made. It’s important to note that she still had long runs that were shorter for recovery — 6 runs between 12 and 14 miles during the 16 week cycle.

I would also stress that her long run progression was based on how she was feeling throughout the training. If she was struggling with some of the other changes we made, then we may not have been so aggressive with her long runs.

Long runs are important because they’re so challenging and marathon-specific — but they’re dangerous for the same reason!

And what didn’t change — Speed work

For the most part, we kept the type of speed work that Brooke was doing the same. The particulars of some of the workouts may have been different, but the focus was the same — aerobic endurance and lactate threshold work.

Partly that’s because the demands of the marathon didn’t change. You could argue that the demands of a race change if your goal is to go from just wanting to finish the distance to having a specific time goal. But I didn’t see a marked difference between 3:40 and 3:30 in terms of what Brooke would need to be able to do on race day (other than, you know, running faster!).

Another reason why I kept the general focus the same is that Brooke was still improving her half-marathon time. Since we were still making progress with her running overall, and since we were making several other changes to her training, I decided to keep the speed work roughly the same.

After all, it’s important to mix up the training that you’re doing, but you want to be careful not to get rid of what’s working!