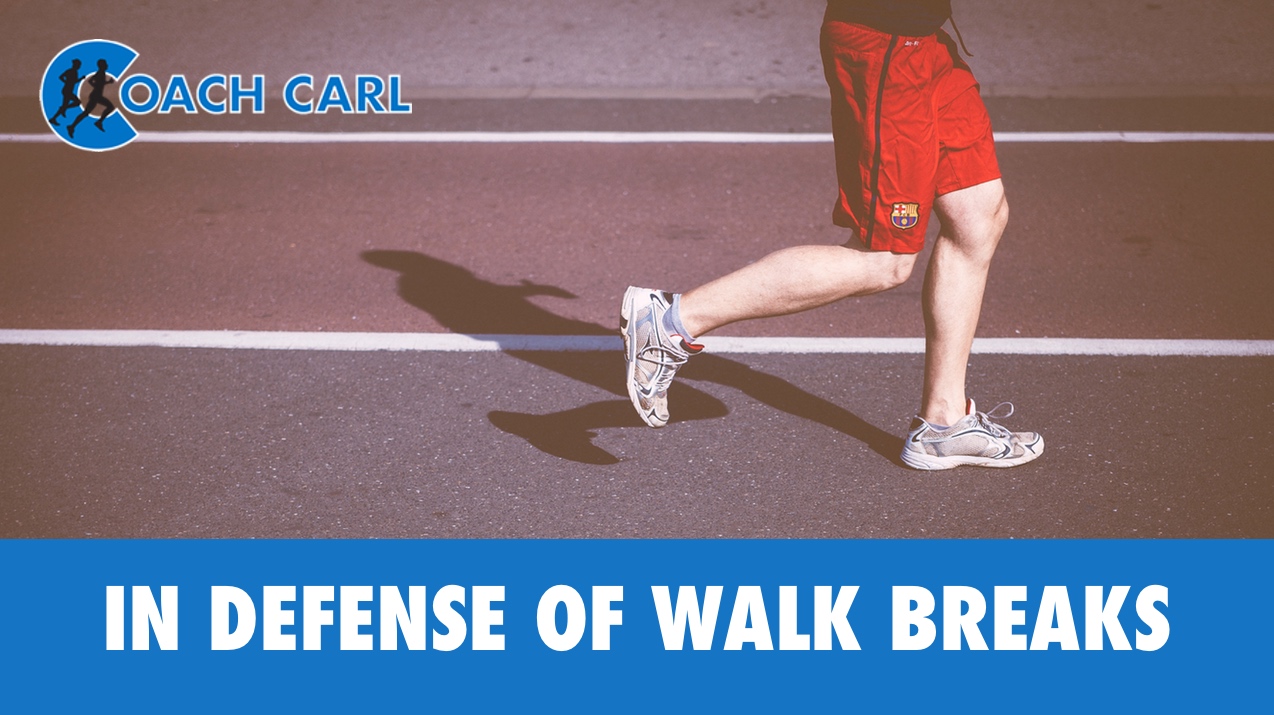 In Defense of Walk Breaks

The idea of taking walk breaks can be a touchy topic. More than once I’ve suggested a client try walk breaks only to be told that they wanted to run “for real.” I know in my younger days, I felt like walk breaks was cheating or wasn’t real running.

But now I think there are some solid arguments for the approach. I want to look at a couple of those arguments while also looking at some of the common criticisms that I hear to see if walk breaks might be right for you.

NOTE: I’m not trying to say everyone HAS to take walk breaks — the majority of the people I coach DON’T take them. But it is a tool that can be used effectively and may be worth trying out if you’re struggling to see improvement or stay injury-free.

When you’re running a longer race like a half marathon or marathon you are using the same muscles over and over again, in more or less the same way. If there are hills on the course, the monotony may get broken up a little bit. But, for the most part it’s the same motion and the same muscles.

That repetitive motion and repetitive stress causes the muscle fibers that are doing the work to become fatigued. Once they are fatigued, they aren’t going to function as efficiently or as effectively.

Taking walk breaks allows those muscle fibers a brief recovery period and a chance to “reset” in a sense.

Walk breaks allow muscles a chance to recover and 'reset'

If you start walk breaks before you HAVE to (that is, before you can no longer run), the walk breaks push back the point in the run where the muscles become fatigued. In a perfect scenario, walk breaks would push that point back so far you wouldn’t reach it at all during the course of the run or race.

The walk breaks also allow your cardiovascular system to “catch up” if needed, which can help you avoid oxygen debt in a race.

This points to another advantage of taking walk breaks from the very beginning of the run: if you end up starting the run too fast, the first few walk breaks help keep your effort in check and allow you to reset your pace to something more manageable when your walk break is finished.

From a physiological standpoint, I like to think of walk breaks the same way I think about the rest breaks during a track workout.

In most cases, you’re taking rest between repeats in a track workout because you can’t hold that pace for the full distance without taking breaks. Walk breaks during a race can function the same way — allowing you to cover a longer distance at a given pace than you could without the breaks.

Longer races like half marathons, marathons, and ultras are as difficult mentally as they are physically. Keeping focus for the full distance and being mentally fresh enough to push your body in the final miles can be extremely challenging.

Taking walk breaks allows you to break the race into smaller, more manageable chunks from a mental standpoint.

Instead of thinking about the whole 13.1 or 26.2 miles you can break it into 2 mile segments, 1 mile segments, or segments based on minutes. This can be much more manageable to wrap your head around.

Having these more manageable chunks allows you to be more positive during the course of the race. When you’re tired in the race, it’s much easier to push yourself to finish the current segment and get to your next walk break than it is to think about pushing yourself for the whole rest of the race.

If the walk breaks are working the way they should be from a physiological perspective, it gives you yet another mental boost. By helping you feel better physically in the later miles of the race, it makes it much easier to keep the positive self-talk going and push yourself to the finish line.

The “it will slow me down” argument

Because walking is slower than running, this is a common criticism of taking walk breaks. But I think it’s important to remember that:

This second point is really important. I know that some people hear “walk breaks” and they think that you have to do a 2 min run / 1 min walk approach or something like that. You certainly CAN do that — Jeff Galloway has been recommending that approach for years and has had great success with thousands and thousands of runners.

But, I think that you can get the physiological and psychological benefits that we’re looking for with a more conservative approach.

I like to recommend taking a 60 sec walk break at every water stop. Of course the number of water stops is going to vary from race to race. But for the sake of argument, let’s look at what would happen if you had an “average” marathon with water stops every 2 miles.

That would leave you with 12 minutes of walking (assuming you don’t walk at mile 26 — I think you’re safe to push it in from there!). If you’re walking at 15 min pace, that means you cover 0.8 miles of the race walking and 25.4 miles running.

This chart shows how much taking these walk breaks would slow you down over the course of the marathon at different paces:

As you can see, yes walk breaks slow you down — but probably not by as much as you would expect. You can see that by running ≈10-15 sec / mile faster you counteract that slow down.

And what this chart doesn’t show is how much you would slow down in the final miles of the race if your muscles become fatigued — a slow down that may have been avoided with walk breaks.

How much do walk breaks slow you down vs. how much fatigue slows you down?

If you’re struggling to maintain pace and run even / negative splits during your races, how much of a slow down are you seeing compared to what you would see with walk breaks?

Is it worth experimenting with “slowing down” earlier in the race with walk breaks to see if you can maintain your running pace throughout?

Think about this in terms of the track workout example I mentioned earlier. If you’re struggling to maintain the pace you want for the full distance you’re running, that’s when walk breaks could be very helpful — in the same way that rest intervals are helpful during a track workout.

The “it’s not real running” argument

I don’t have a great counter-argument here. If you feel this way, then I don’t think there is much that I can do to change your mind.

I will mention again that we’re talking about 0.8 miles of a marathon (3% of the race), and in a typical marathon lots of people do some walking because of cramps, blisters, fatigue, etc. Is walking through a water stop every 2 miles really so different just because it’s planned?

When I lived in Colorado, most years I ran the Pikes Peak Ascent. I wanted to break 3 hours in the race and year after year I was in the 3:15-3:25 range. Every year I ran as much of it as I could and then hiked the rest (usually the last 3-4 miles).

Then after hearing Jeff Galloway talk, I decided that since I was spending all this time walking during the race anyway, I might as well plan it out and do some of my walking earlier in the race.

I took a 1 minute walk break every 4-10 minutes depending on where I was on the course / altitude / etc. I was able to keep that up the whole race and ran 2:52, winning my age group, and placing 21st overall — all MUCH better than I had ever done before.

I can promise you that the excitement and pride I felt was not diminished at all by the fact that I walked, or that I walked before I had to. I didn’t feel like I cheated or hadn’t earned it. I just knew I had hit the goal I had been pointing towards for years.

If you’re in a similar situation, I think you owe it to yourself to consider walk breaks and see if it makes sense. I guarantee you that if you hit your goal, set a new PR, or even BQ (as my brother-in-law did taking a 1 minute walk break every mile during his marathon), no one will think to ask “yeah, but did you run the whole way?”